Le Journal de la Haute-Marne : “A director at the chapel of the Jesuit”

Report of the “Journal de Haute Marn”e during the filming of the documentary « Lonelies of the streets ». Published Wednesday, February 24, 2016.

A director at the chapel of the Jesuit

Benoît Labourdette, director, came to Chaumont last week. His goal ? Going to the chapel of the Jesuit, simply, to shoot into the place. He already knew Benloÿ, one of photographers who exhibits at this time, and discussing with her, that she eventually to tell him of the chapel. After an initial visit, Benoît Labourdette is conquered. “When I saw it, I had the impression that there was something to do there.” But he did not know yet what he would do, that he wanted to talk about all the artists exhibiting there at this time. “The idea is to make a short poetic about the exhibition, something with sounds of ambience.”, explains the director. There may also be other sounds, it will be evaluated at editing stage. During his weekend of presence, he has for example recorded Benloÿ reading the text of presentation of his series of photographs. He has also filmed without in and then with an audience. Now that images are filmed, Benoît Labourdette has to edit. A job that should take a few weeks. Then, the video of the film will be put online on his website. A little patience, so... 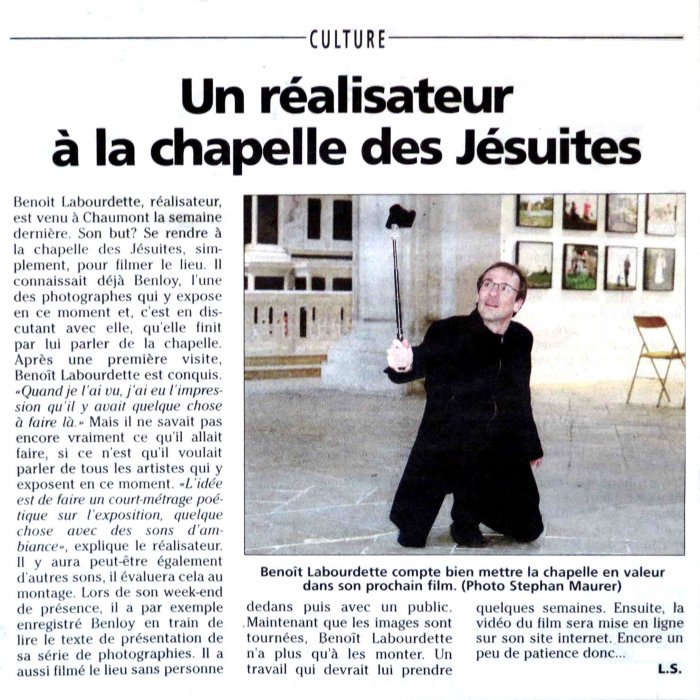 Some excerpts from what is being said about my work, as well as interviews, broadcasts and articles in their entirety.