Attempt to create the “ideal” website for a filmmaker:www.jeanbaptistemathieu.fr..

Jean-Baptiste Mathieu is a prolific director, who has associated his vision with portraits of artists, experimental and musical videos, theatrical.... He has accompanied innovation in television broadcasters, and also produces more traditional television “products”. Thus his films can for years be found “everywhere” on the Internet, in a wild way. Until now, he had not yet created the place for official information on his work.

Jean-Baptiste Mathieu was maturing its long-standing website project. We have set up a fundamental dialogue and a careful study of other filmmakers’ websites in order to build a relevant and sustainable object. As a filmmaker myself, and having known Jean-Baptiste Mathieu for 25 years, we were able to get to the point quickly.

The starting point of the working method was not to start by thinking about a layout, but to start by building a structured “database” of films, their content and credits. Thus Jean-Baptiste Mathieu, a little like a film editor, began to gather information about his films, and entered it gradually into a “back-office” that I had set up for him very quickly. I have used the SPIP french CMS, which I believe is one of the most professional web publishing tools for more than fifteen years.

The idea was not simply to create “pages” for each film, but to connect all the elements of the films together. And it is in the course of this work that Jean-Baptiste Mathieu gradually clarified the global structure of relations within his work. I accompanied and supported him in this process, which was unusual at first, and then became richer and more motivating as we progressed, because everything connects and makes sense to each other.

The principle of this working method was a progressive structuring of the data, evolutionary (the system I had set up allowing it), because we cannot, before working concretely on the material of its content, anticipate all the new functionalities that will appear to us. It is an agile working method.

The technical data sheet of the films 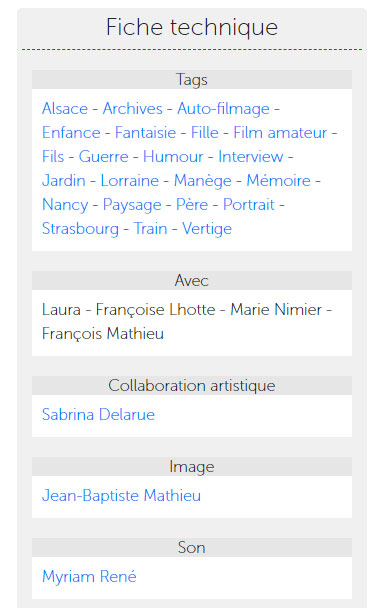 In the technical data sheet of each film, all the terms are clickable: if you click on the producer, or the chief operator, or the broadcaster, or the co-author, you have immediate access to the collaborations over time. It is about building a valuable and unique knowledge base on a work, which makes it all the more exciting.

This is what websites like Allocine or IMDB do, but to my knowledge, on the part of individual developers, this requirement for data structure has never been brought to this point before. This allows, thanks to this “structured data”, to circulate in a free, personalized and singular way in the work. Basically, it is to offer the Internet user all the flexibility that IT allows.

As we can see, Jean-Baptiste Mathieu has also chosen to assign thematic tags to his films, which he has greatly evolved as the work progressed. They offer a thematic navigation between the films of a richness that unfolds as we move through them. This is therefore the construction of a real interactive object, which makes it possible to meet a work in greater depth. There is a writing of the director, fully, by the keywords he assigns, which offers the Internet user the possibility to make his own way, in the writing of an author. The website is therefore a real form of interactive writing, in the full sense of the word.

Example of data entry in the back office

For example, the different broadcasters are not written in the film file, but are linked to the films concerned. This is how all links are made, and offer the future flexibility of navigation. The system is identical for all sections of the film data sheet. 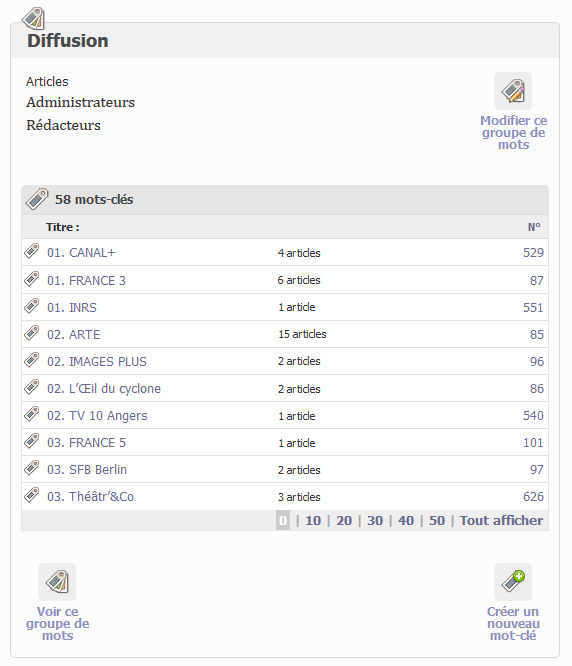 From the moment that the data on the films began to be structured, I proposed layouts, inspired by the reference sites initially identified by Jean-Baptiste Mathieu. Step by step, we have refined, detail by detail, the layout of each element of the website.

Then, because of the possibilities offered by the linking of films through their in-depth content, we were able, for example, to offer links to the three films that share the most keywords with each film. It is a system of editorial automation: there is nothing to do, the system creates the relationships alone from the data. Thus, it is quite natural for the Internet user to circulate between films. This is called transversal navigation, which is so important in the way we encounter information on the Internet.

One detail: the illustrative images of the films are automatically cropped so that the film lists are homogeneous in terms of layout. On the other hand, when you arrive in the page of a film, the images in 4/3 format are respected, the images in 16/9 format too. But the director, in the back office, only had to put a single image, the original, and it is the site that automates the layout principles.

The site is of course built in responsive design, based on the robust FrameworkBootstrap which is the world reference in this field.

What his website now allows Jean-Baptiste Mathieu to do is to build the universe of his work, to offer it to the world in a coherent, sustainable, structured and attractive way.

I accompany the design and implementation of web projects, to articulate policy issues, technical, content, organizational and methodological work. These range from project management (technical design specifications and service monitoring), training of editors, or even manufacturing sites A to Z. Here are several websites that I made.