As part of the launch of the new national coordination Passeurs d’images, I proposed an “interactive cinema session”. Come in, ladies and gentlemen!

On June 5, 2018, Passeurs d’images, a national image education scheme funded by the CNC and the CGET, chaired by Laurent Cantet, made a public presentation of its “new era” at Cinéma des cinéastes (Paris). 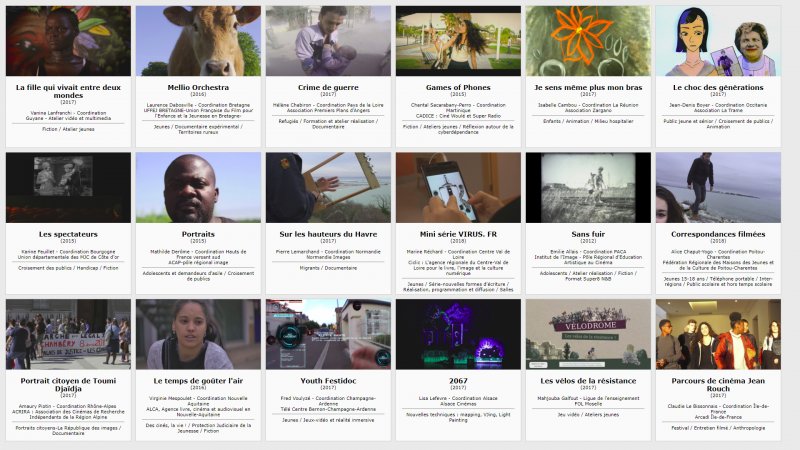 To see the image wall : https://www.benoitlabourdette.com/_docs/projets/2018/2018_passeurs_d_images_lancement/2018_mur_images

Half-light in the room. On the screen of the cinema, this “image wall”. Behind each vignette is an extract from a film made in a region of France as part of the “Passeurs d’images” scheme.

The session lasts 45 minutes. I present the principle to the audience: a person in the room will ask to see the extract he wants (1 minute 30 per extract). I’ll click on it. During the screening of the extract, the microphone will have been passed to the coordinator who supervised the project, who, just after the screening, will orally pose the issues of this project in 3 minutes. An exchange will follow in the room. The person who asks a question chooses the following extract, which will be shown on the same principle. And so on, a meaningful and sensitive path is invented between extracts and interventions.

On the screen, there are the vignettes, the titles of the films, the themes covered as well as the name of the coordinator, so that the intervention at the microphone is embodied.

Of course in 45 minutes all extracts could not be shown. That wasn’t the point. The aim was to make the diversity of the cultural and pedagogical approaches of the Passeurs d’images network feel, in a non-prescriptive, open and singular way, to the collective sensitivity of the people present. This has worked very well, bringing the public through digital, heritage, political and social approaches... and their meaning in terms of territorial inclusion and democratic issues.

The “substantial marrow” of Passeurs d’images has been made tangible in a very concrete way. Passeurs d’images is such a rich and diversified project that it is quite difficult to imagine it. This “image wall” provided a very clear synthetic representation.

At the end of the session, a QR code allowed attendees to use their phones to access the “image wall” so they could immediately see the other clips.

My goal was for the spectators to be able to take part in the programming of the session. To move from the “passive” posture of the spectator, in order to allow the construction of a deeper and invested interest for the films. It worked very well. Even for those who did not choose an extract themselves, the session in which they participated was invested with this dynamic, this energy, this singularity, this “magic” proper to the performing arts. It was a moment whose content was unique.

To concretize this idea it was necessary to define very precisely the framework then to ask all the coordinators to choose a film, an extract and to specify the exact mentions stipulated beside each extract. This is a very careful database and monitoring work, which was conducted by Santiaga Hidalgo.

Then, it was necessary to recover video files from the films, extract the selected sequences and vignettes in a “clean” way, harmonize the sound levels and framing, and have them validated by the coordinators. As well as validate, re-validate and correct the “wall of pictures” itself, which is an HTML page specifically designed for the occasion.

Construction of the HTML page The HTML page “wall of pictures” was built in 16/9 Full HD format (1920x1080 pixels) in order to correspond exactly, to the pixel, to an academic video projection. In short, this page (which was read from a full screen web browser) was designed not for a computer screen, but for a movie theatre projector.

To build this result dynamically and to be able to integrate in a flexible way the regular corrections which took place during the process, the contents of this page were recorded in a Filemaker Pro database, of which I exported an Excel sheet to be able to easily receive corrections. The email addresses of the 18 coordinators concerned were integrated into the database in order to simplify communication.

And I had built a script in Filemaker Pro to dynamically generate the HTML code for the “Image Wall” page.

And finally the videos are not hosted on a community video site, they are encoded and directly hosted on the platform of Passeurs d’images.

On the other hand, for on-site projection, so that it could function independently of a connection, this “mini local website” was copied onto the computer connected to the video projector. I had made it available to the projectionists upstream so that they could download it and do the projection tests themselves.

The goal of this method was that each of the many stakeholders in the process could have full and complete means to build and validate its part. It was a true collective construction, made possible by a framework that was both rigorous and flexible.

The association Passeurs d’images aims to federate and animate the entire national network of out-of-school image education, in particular within the framework of the “Passeurs d’images” scheme and the "Des cinés, la vie ! ».

Passeurs d’Images, a national out-of-school image education system, participates in the implementation of public policies and private initiatives contributing to education and the emancipation of citizens. As part of the CNC-State-Region conventions, the system is supported by 25 regional coordinations throughout the national territory (metropolitan France and overseas France) and is aimed primarily at young people aged 12 to 25.

In a constant concern for the cultural development of the territory, Passeurs d’images is:

The association affirms its will to work in close collaboration with all professionals in image education and, in particular, cinema networks and regional image education centres.

Image couriers consider it essential to make the link between school time, extracurricular and off-school time, to open up and decompartmentalise the systems for the benefit of all audiences.

Passeurs d’images underlines his attachment to the operation, “Des cinés, la vie !”which aims to raise awareness of the image and citizenship of minors under the judicial protection of juveniles.

The association Passeurs d’images is supported by the CNC and the CGET and by the Ministries of Culture and Justice.

I produce and direct corporate films and their possible projection sets, articulating the work with the exact needs. Invent methods of work, often collective, which will enable the project to meet its objectives better both in its content and in its way to be conducted, its budget and technical requirements.