Accompaniment of a collaborative web documentary project initiated by Canopé 92 for the teachers of nine classes in the Hauts-de-Seine department.

The Atelier Canopé 92 is at the origin of this collaborative web documentary project. The aim of this initiative is to fuel the national platform “Raconte ta ville”, which includes web documentaries produced by pupils from primary school to high school.

A “web documentary” is an interactive multimedia documentary designed to be broadcast on the web. It allows the development of narrative and non-linear navigation.

This action, carried out from November 2016 to June 2017, has the ambition to make nine classes from three Hauts-de-Seine establishments (located in Issy-les-Moulineaux, Le Plessis-Robinson and Nanterre) work on a common project.

Framework of the project

Canopé 92 solicited Benoît Labourdette to set up a collaborative multimedia writing process by these nine classes in three different schools. The aim was to support teachers to create a collaborative web documentary on the theme of the environment. To achieve this goal, he had two 3-hours meetings with the 10 teachers and 3 hours of follow-up with Nicolas Haushalter, who was in charge of the web-based production of Canopé 92. In the time allotted to him, Benoît has made sure to transmit the necessary tools so that everyone can be as autonomous as possible. Thus, he did not need to intervene on other occasions outside these working meetings. Here’s how the team worked to achieve its goal.

Project launch: knowing each other to build together

The first meeting was held in November 2016 at Canopé 92. Benoît Labourdette hoped that after three hours, the group would meet and then define the project to be implemented during the year. It is, indeed, better to know each other before beginning to work together.

During this meeting, there is a lot of discussion among the ten teachers . In order to organize the ideas of each one, Benoît writes them directly in a software of mindmapping. This collaborative brainstorming is projected live so that participants can express themselves and discuss freely while knowing where the discussion is. Then, they can find their ideas, those of others and make connections. This method allows more efficiency during the meeting, but also induces a saving of time thereafter since it becomes much simpler and quicker to share a synthesis of what was said.

The first brainstorming is devoted to the theme “Tell me your sustainable city” :

Benoît then takes the time to write down the name of each teacher by grouping them by city so that everyone is clear about how the working group is organized, divided into three subgroups. This tree strucure makes it possible to memorize the names of the others and also participates in the constitution of the collective. Here again, the challenge is to build together a concrete document that everyone can reuse. If this stage took a little time, it was worth it because, by knowing each other better, everyone felt more at ease and the group worked more efficiently. This proves the importance of forming the group before we even work together. Collaborative mindmaps can be effective tools for such goals. 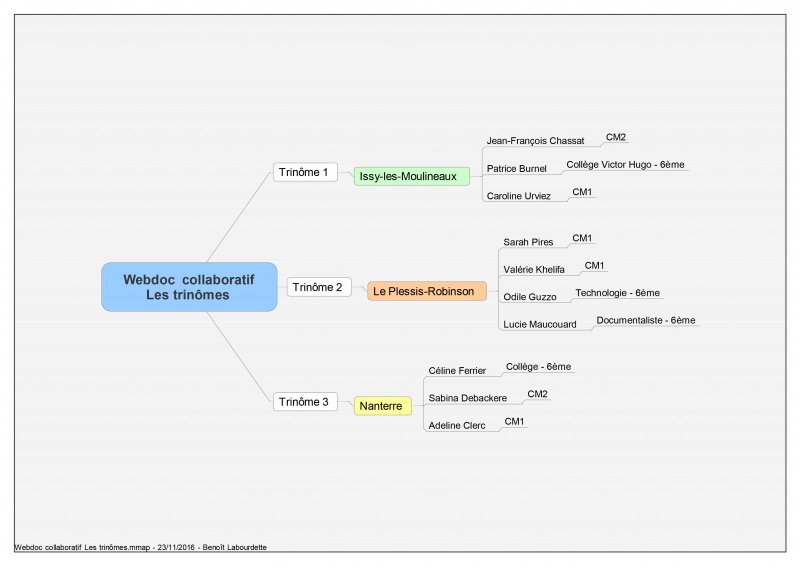 Now that the workgroup can work together more closely, it can give concrete thought to the project. Everyone brings their ideas about the content of the web documentary. The mindmap, here again, gives a direct overview of what is being built. This is only the first meeting, but the project is already launched. This tool provides a clear and concrete document, which can be reinvested directly after the meeting without the need to write a report.

Following this meeting, each teacher will have to carry out a part of the web documentary with his class. It is therefore important to find a simple guideline for federating the project. Since it seems complicated to imagine a collaborative narration in such a short time, it is decided to invent a recurring character that would accompany the viewer in each part of the web documentary. This character will allow coherence between each class project, even if these are different. The team then makes the choice to propose to each pupils to imagine a character. Each class will select three drawings, which will then be put online on the college’s Digital Work Environment so that all the students of the project can discover them and vote for one of them. This final vote will determine the winning character.

From this common character, “Mister Canette” (Mister Can), each class will have the school year to set up and realize the content of the web documentary, in autonomy. This anti-pollution superhero will allow them to work about recycling of waste and ecology. A joint work plan is elaborated at this meeting. 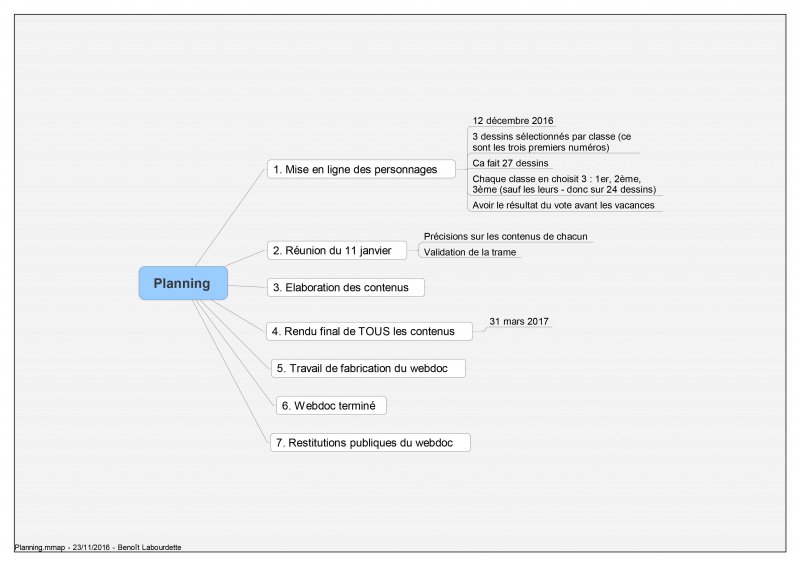 The foundations of the web documentary, from its appearance to its construction

The second meeting, organized on the 11th of January 2017, was devoted to graphic design issues. If the character of Mister Canette makes it possible to imagine a narrative between the projects, it is necessary, nevertheless, to find a visual coherence. The visual elements of the drawing are then identified and Benoît writes them in a mindmap. It was at this point, for example, that the team decided that the button back to the menu would be the drawing of an apple that had attracted attention but had not finally been retained. Then everyone shares what he has done up to now with his class. If the projects are quite different from each other, they all show the recurrent character and respect the theme.

This meeting is also the subject of more technical demands that teachers express collectively. They are wondering, for example, how to deliver their content to the person who will be responsible for designing the web documentary. Benoît explains, for example, how Handbrake encoding software works, which will allow them to reduce the size of video files without altering the quality and thus send them more easily. Given their interest in mindmaping, a tool widely used in both work meetings, Benoît also transmits a few software names so that they can, in turn, use this technique.

This meeting is finally an opportunity to agree on the web documentary tree structure, which must be simple and functional. It is very quick to organize the projects by class, offering the spectator to walk from city to city. Establishing the structure of the web documentary now is very important, because it is the last time that the team is complete. Although it was initially a question of working together, it proved complicated to organize other common times, given the geographical distance and the schedules of each one. But the structure chosen proposes to appropriate the project while maintaining a global coherence, allowing a better efficiency. 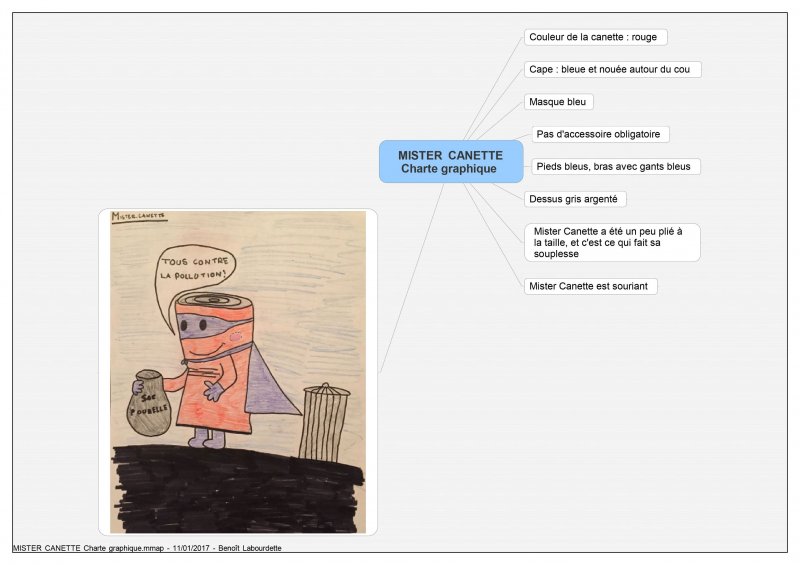 Making a collaborative web documentary, a simple structure for a homogeneous result

Between January and the end of March, teachers continue to produce content with their pupils, while being in touch with Nicolas Haushalter, the digital mediator of Canopé in charge of the design of the web documentary. The structure is well defined, everyone knows precisely what is left to do and things are moving fast. The teachers know what they have to send to Nicolas, who himself can move forward as he learns where he is going. Favoring a simple structure avoids structural and narrative problems, and thus concentrates on the quality of the contents.

Once the web documentary is finished, Nicolas Haushalter passes it on to Benoît who makes some returns, notably about the ergonomics.As each part is realized by a different class, the final is not homogeneous.Each class has, for example, imagined a different background, which gives the impression of being in front of several web documentaries. Benoît asked Nicolas to rework the graphic cladding so that one feels in the same universe when navigating from one part to another.

To design this web documentary, Nicolas used Klynt, a paid French software. Readable in a web browser, these web documentaries are made with the highly standardized HTML5 technology, which is expected to function in the next decade. Moreover, Klynt offers the possibility to archive the web documentaries, and thus to make it work off-line. In addition to being able to consult his work without an internet connection, it is possible to keep it. Sometimes videos from web documentaries are no longer valid when they come from external websites that cannot host them indefinitely. Klynt then proposes to integrate the videos in the web documentary itself, ensuring, here again, their durability.

You can discover the webdoc here. 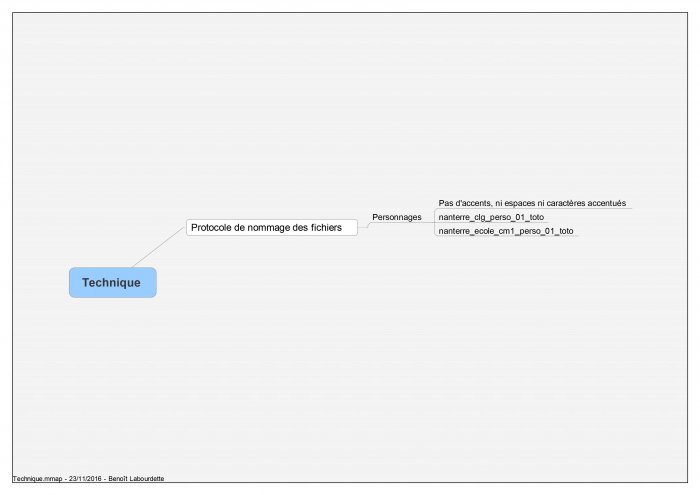 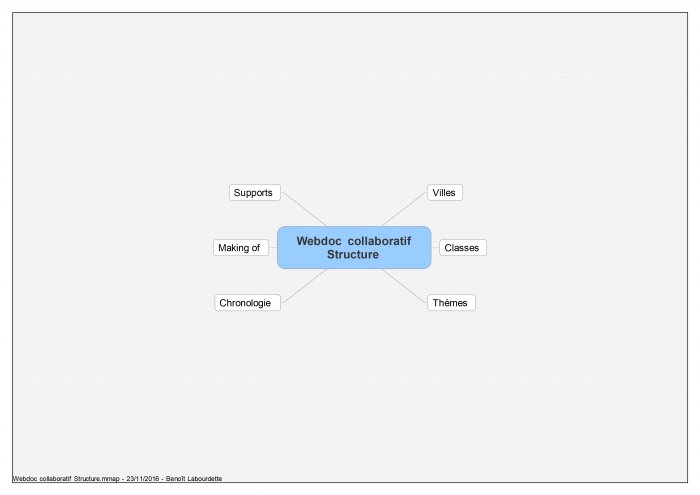 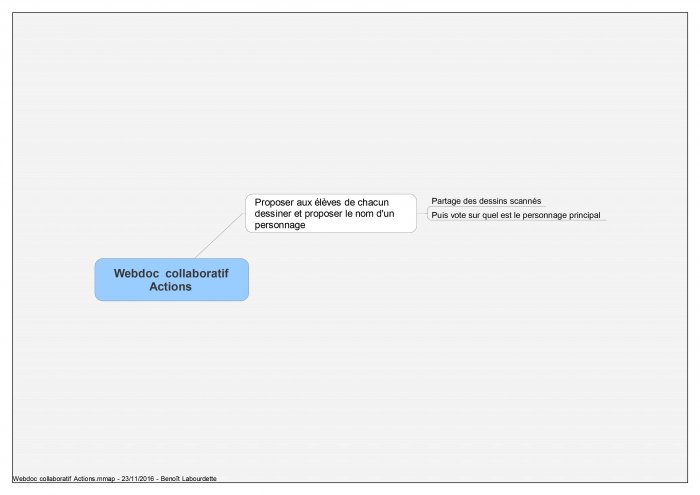 In the context of cultural events, film festivals, theater festivals, launching of exhibitions, or in the school setting, proposals for innovative and participatory cultural actions with digital technology.