City of Choisy-le-Roi : drone workshop in a neighborhood

Audiovisual workshop with drone for young inhabitants of the city of the Navigators in Choisy-le-Roi, as part of a multidisciplinary artistic project.

As part of the Urban Renewal project in Choisy-le-Roi, several successive actions took place between September 2016 and July 2017. Myriam Drosne and Marie Ann Thrân, two artists from the Paris Concert company, initiated and coordinated this project, “To be here and there at the Navigators” with the aim of allowing the inhabitants to rediscover and reclaim their neighborhood by means of different artistic mediums (plastic arts, installation, photography, cinema). Link to the blog of the project: http://declicatelier.blogspot.fr/. During two days, Benoît Labourdette intervened with a group of young people in order to make films. A desire to educate people about images that is also part of a citizen’s project.

The workshop took place during two days, during the week, on school holidays. In such a project, it is often difficult to form a group of assiduous and involved participants from beginning to end. In fact, over a fortnight of young entrants, only one third appears on the first day. Realizing that it would be complicated to make a film under these conditions, Benoît chooses to take account of these constraints and reinvents the workshop on the spot. He then seizes an opportunity that is offered to him: the fascination of young people about the drone that he had brought. It is decided, each participant will make himself a short video shot with the drone. This system will allow everyone to take part in the project, whatever its availability, and will also offer a place for newcomers. Because the drone challenges and arouses the curiosity of young passers-by, then invited to join the adventure.

Very quickly, the place is given to creation. One of the participants takes control of the drone, the others are the actors of the film. Each film is at the crossroads between experimentation and discovery. The final film then becomes the trace of the process of creation of each one. At the end of each shooting, the group returns to the “House of Projects” (office of the team of the urban renewal, also place of the workshop) and discovers the images. This time is the occasion to establish a spontaneous dialogue on the experience that they have just lived and thus to raise the stakes of education to the images in an informal way. The drone, noisy device, does not record the sound. Benoît then proposes to the young people to create the soundtrack of the film, which is recorded in improvisation, in one go, before the images. This sound dimension is an interesting point to be addressed at such a workshop as creating images and sound separately leads to a reflection on the audiovisual language. If time permits, it can be the opportunity to work a more complete narrative by completely reinventing the sound universe. Finally, Benoît Labourdette quickly assembled the film in front of the participants, sticking the soundtrack, the collectively chosen title and the credits. The final film is then looked at one last time. It will be put online in the evening so that young people can reclaim it.

The position of the supervisor in a workshop with a drone is between control and risk taking, like this object both controlled and autonomous. Here, it is really a matter of experiencing a multi-faceted experience, in the way that no one is completely in control of the situation, and so everyone is in a dynamic of learning and discovering. By letting young people control the drone, Benoît chose to trust them, to hold them accountable. If the stakes are high for the participants, seized by this impressive object, it also a challenge for the supervisor who takes the risk that his drone is destroyed or lost. But it is a risk that it seems necessary to take in order to be in the same state of experimentation as the participants, and then privilege a horizontal posture. When he feels an error will happen, he lets the young people do it instead of trying to avoid it. Thus, on two occasions situations have allowed them to find themselves all together facing a problem to be solved: find the drone on the roof of a garage, or recover the lost connection by climbing on a fence. While maintaining a certain mastery of the situation, it assumes its risk taking and thus establishes a mutual trust allowing the smooth running of the workshop. This idea is important because it allows to learn by valuing the skills of each one. By living an experience, everyone finds himself faced with sensations, new situations. A place is thus left to each individual and the workshop is built according to what each one brings to it.

If the films can seem simple as they are made in one shot and alos because of the improvisation and the approximate mastery of the medium, they have actually been vectors of a real pedagogic interest in terms of image education. By piloting the drones themselves, the participants have truly reappropriated their daily space through the image. In addition to (re) discovering their neighborhood singularly and from a new point of view, they seized the image in a playful way, constructing their own representations of this city, which will soon disappeared. They have thus become authors of a singular memory, which will take even more meaning and value once the neighborhood will be redeveloped. This is the process of creation and what the participant retains from his experience that are at the heart of the project.

All the films made during this workshop are available here: http://www.benoitlabourdette.com/_d.... Here is a selection:

The Attack of the Extraterrestrials (a film by Riheb)

View From the Sky (a film by Sid Ahmed) 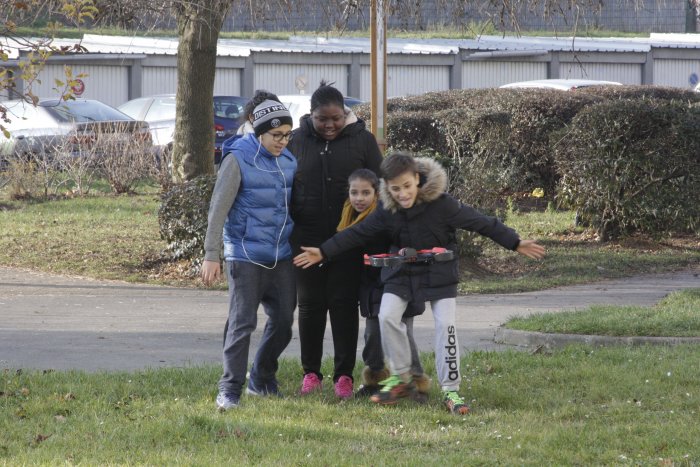 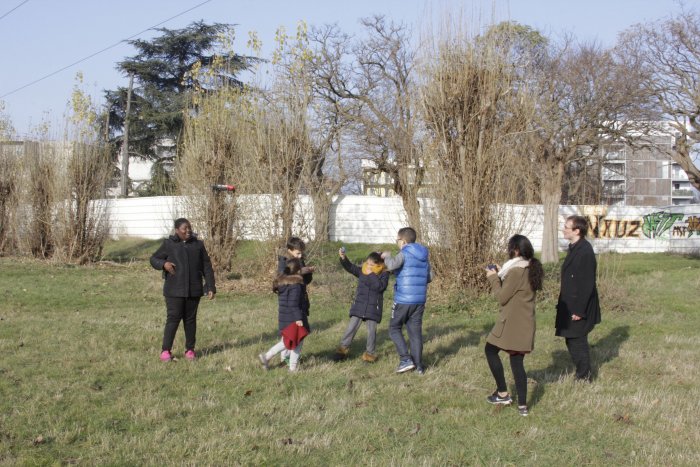 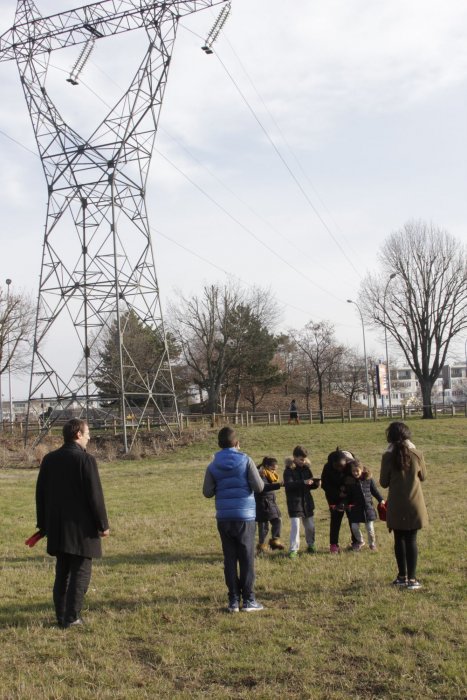 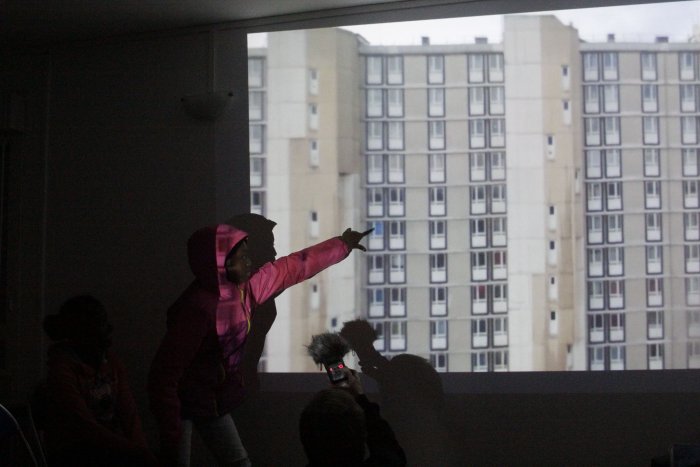 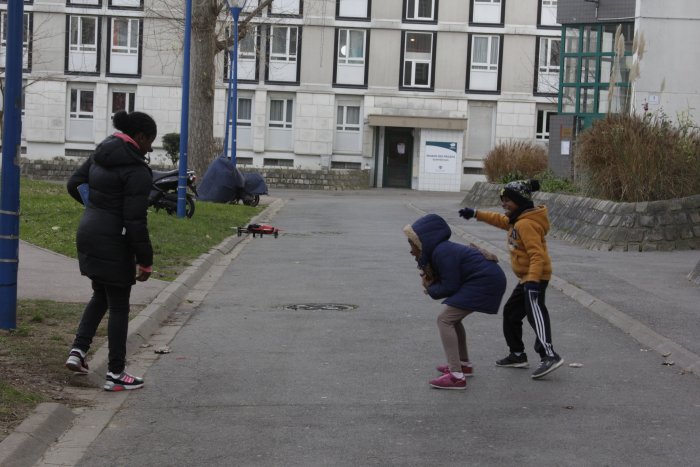 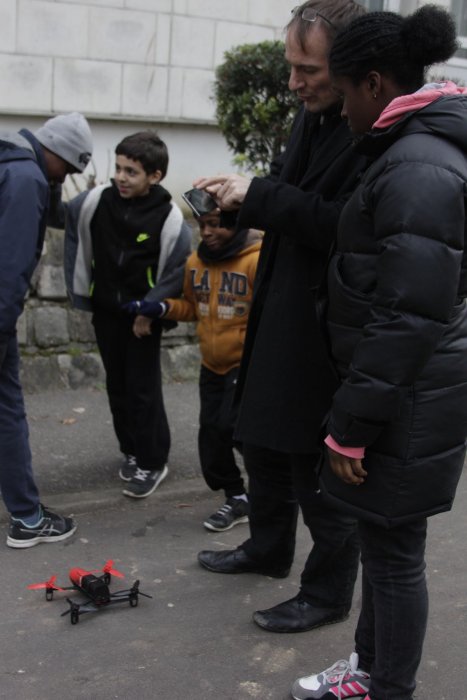 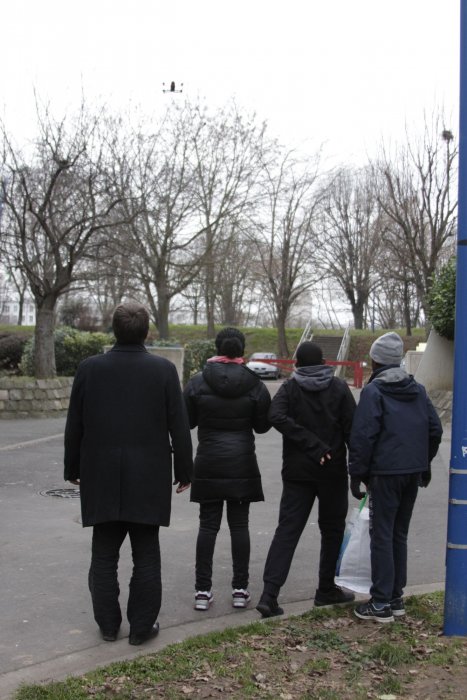 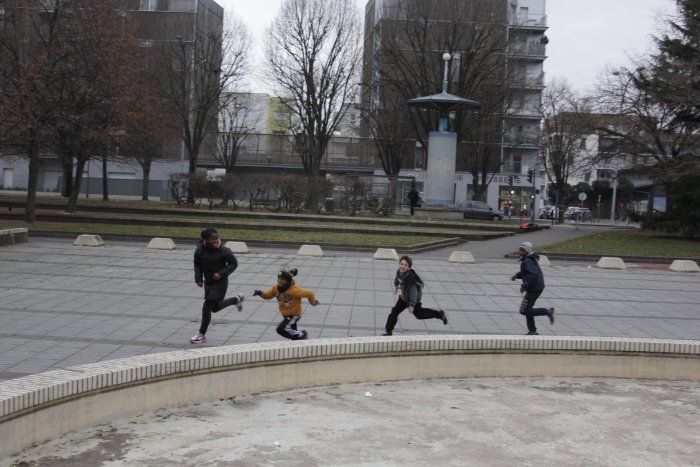 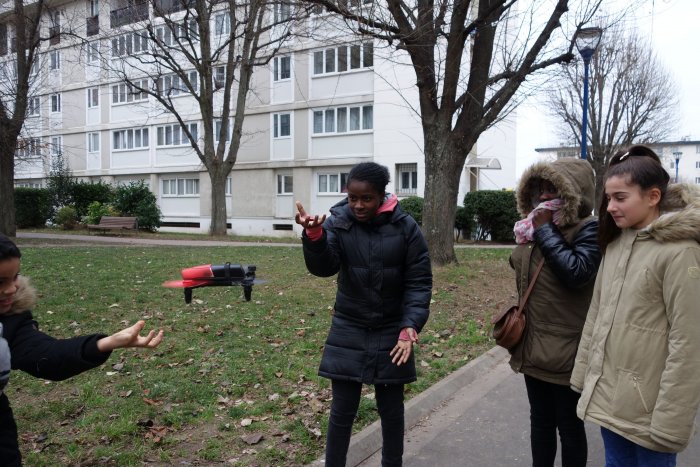 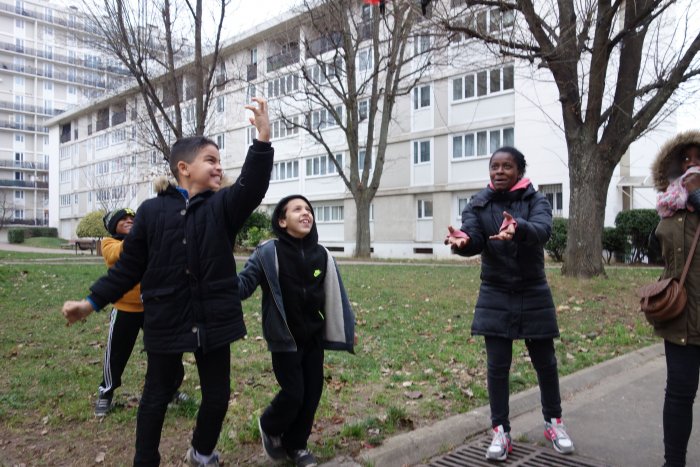 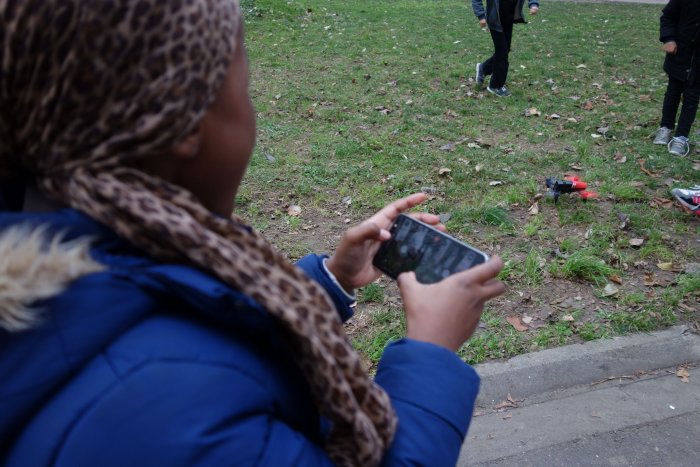 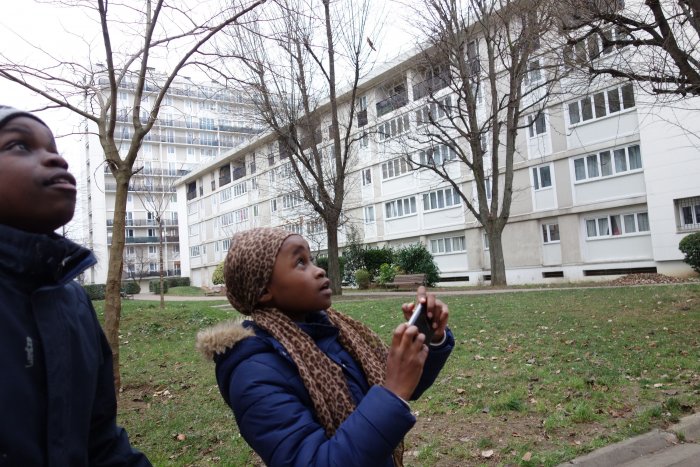 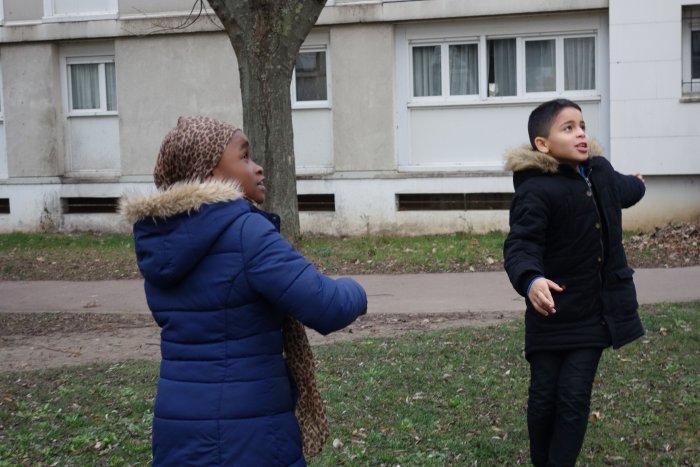 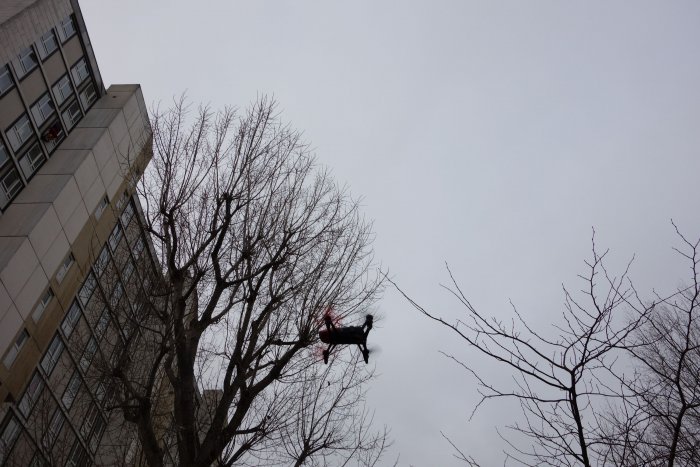 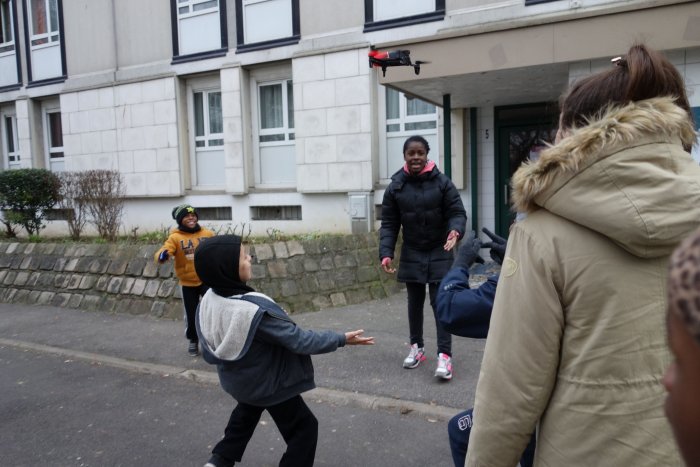 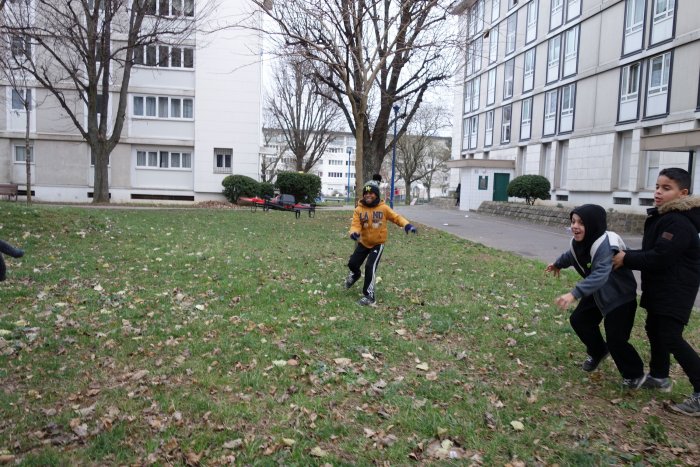 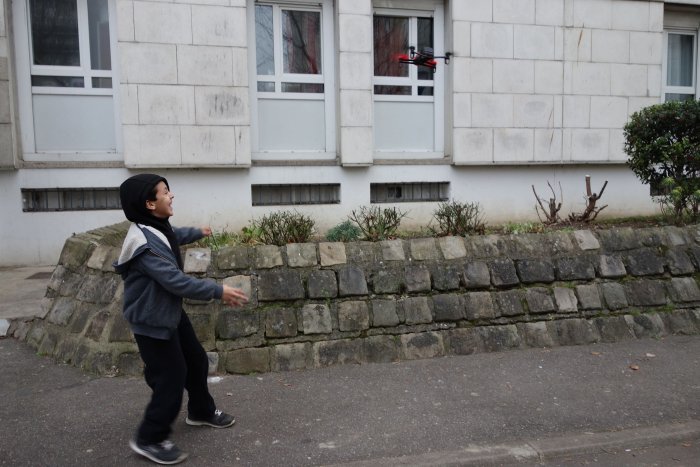 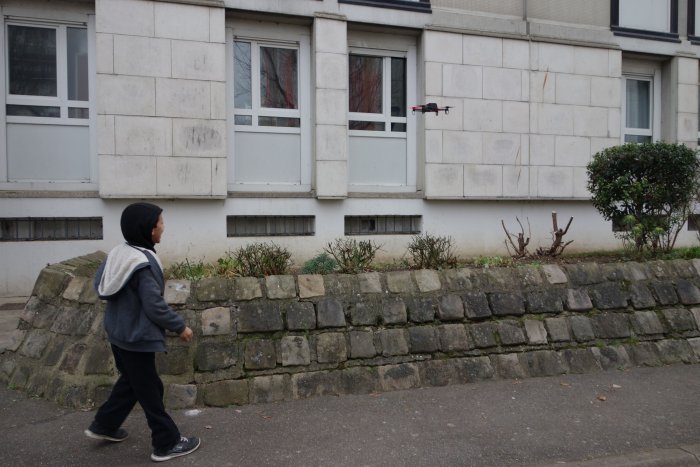 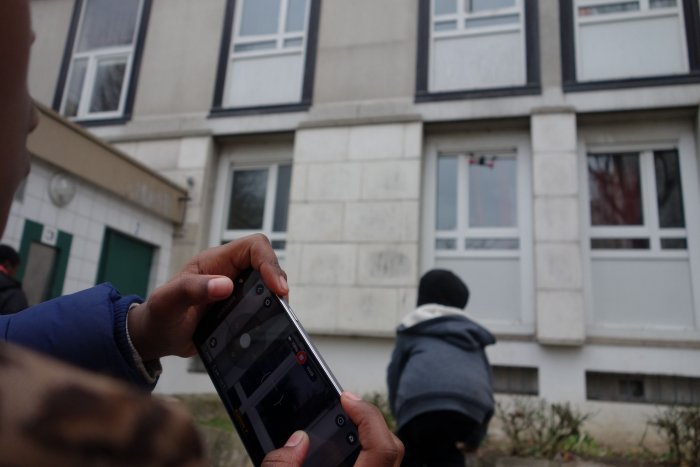 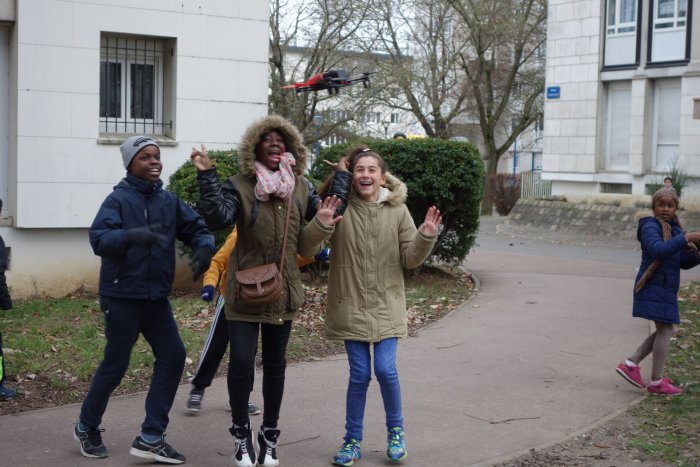 The drone is “democratizing”, begins to enter our lives. The world seen from above, the real world through this flying eye, disembodied, as in our vision of virtual worlds... our representation of the world is changing because of this new “look”, which is spreading.But what is the point of view of this disembodied eye ? What political position holds on it ? What new aesthetic derived ? What relationship to the body, to the territory, to the architecture, is deployed there ? In short, what is happening to our viewpoint ?It seems important to me to explore the use of these machines in their (...)